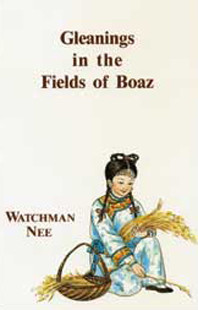 Gleanings in the Fields of Boaz

Gleanings in the Fields of Boaz: A Collection of Spirit-filled Messages

So rich were the fields of Boaz that even the gleanings from them were more than sufficient for the livelihood of Ruth and her mother-in-law, Naomi (see Ruth 2). God gave such abundance of revelation and utterance to Watchman Nee that in his several decades of active ministry numerous messages were delivered by him, mostly in speaking and some in writing. Many of these precious messages have been translated and published in English either in books or booklets. Yet there were still sheaves left in the field waiting to be gleaned. These were too valuable to be lost. Hence, the compilation of the contents of this book.

"It is the brilliant who get into the most trouble because they rely on their wisdom. The people who are far less bright have little trouble inasmuch as they have only God on whom to rely. But where there is 'policy,' there will always be crookedness, deceit and sin. Weighing the question, looking at the various sides to the question, figuring out what might happen if we say or do this or that—all this is pragmatic 'policy.' For the Christian, though, it is sin. God will not allow you to act and follow what you think, but to act and follow after His will. Sometimes you may feel as though you are heading straight toward something dreadful, but if this is His will and way, then do not reason but simply obey with childlike faith."
Watchman Nee, Gleanings in the Fields of Boaz

Gleanings in the Fields of Boaz contains foundational teachings on how to live by the life of Christ before graduating to deeper messages on becoming a spiritually mature believer. Also inside are several letters from Nee, some open and some personal, including his last letter written from the prison camp before he died. May each reader find fresh encouragement and lasting blessing from this rich collection of wisdom!