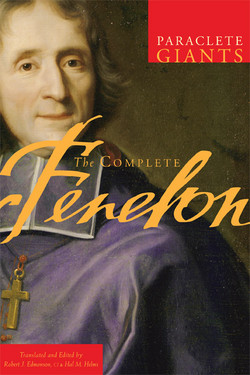 The Complete Fenelon – The Royal Way of the Cross, Talking with God, Meditations on the Heart of God, and God of My Heart

Throughout Fenelon’s lifetime and the centuries that have followed, Christians who have felt drawn toward a life of closer communion with God have found in Fenelon’s writings a depth of understanding of their struggles that has been a source of profound encouragement. Fenelon’s penetrating letters of advice and counsel to his friends have been translated and widely distributed in a number of languages, and have found a wide audience in English translation.

The writings included in The Complete Fenelon show how deeply he was steeped in the Scriptures: words from biblical passages can be found on nearly every page that Fenelon wrote. So acquainted with the Scriptures was Fenelon’s audience, that it was his practice to quote from Scripture without giving the reference—his readers would recognize them instantly. To help today’s reader catch the freshness of the original, the publisher was true to his style and did not include Scripture references directly within the text. However, readers who wish to find the Scriptures mentioned in The Complete Fenelon will find extensive notes, keyed to the text, at the end of the book.

“Did you hesitate or resist so much when the world sought to seduce you through its passions and pleasures? Did you resist evil as forcefully as you resist what is good? When it is a question of going astray, being corrupted, lost, of acting against the inmost consciousness of heart and reason by indulging vanity or sensual pleasure, we are not so afraid of going too far; we choose, we yield unreservedly. But when the question is to believe that we, who did not make ourselves, were made by an all-wise, all-powerful Hand—to acknowledge that we owe all to him from whom we received all, and who made us for himself—then we begin to hesitate, to deliberate, to foster subtle doubts as to the simplest, plainest matters. We are afraid of being credulous, we mistrust our own feelings, we shift our ground. We fear to give too much to him for whom nothing can be too much, though we never gave him anything yet. We are actually ashamed of ceasing to be ungrateful, and of letting the world see that we want to serve him! In a word, we are as timid, shrinking, and shy about what is good, as we were bold and unhesitatingly decided concerning what is evil.”
Francois Fenelon, The Complete Fenelon – The Royal Way of the Cross

As you read The Complete Fenelon, sitting at the feet of this wise counselor and teacher, you will find encouragement and strength for your journey toward the heart of God!