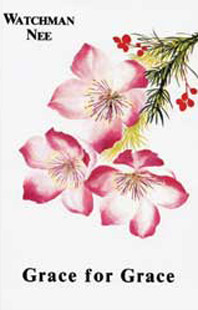 What does it mean to receive grace for grace?

"For of His fullness we all received, and grace for grace" (John 1:16). "Grace for grace"—this is the blessed portion of all who receive Christ. But just what does that entail? What is the measure of the grace we receive when we receive Jesus Christ?

"Such salvation as [the Prodigal Son received] reveals how God will treat you and me: it is not how we think we will be treated by Him. If it were according to our thinking, we would at best be a hired servant forever. We think of ourselves as sinners, but God declares we are children. We think we will perish, but He seats us at the table. There is absolutely no danger of saying too much about the grace of God. We think we are not worthy to be called sons, but He does exceedingly above that which we could ever think of. Let us thank God, for salvation is not according to our thinking and concept, but according to His."
Watchman Nee, Grace for Grace

In Grace for Grace, Watchman Nee uses a series of parables that deal with the new and the old together with the parable of the prodigal son in order to illustrate what exactly the grace is that we have received.

This is the truth about our God; this is grace upon grace. May we bow and worship the Lord of grace!