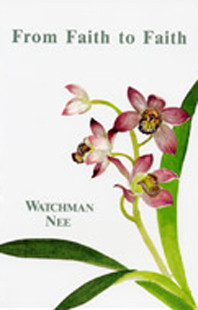 From Faith to Faith

For [in the gospel] is revealed a righteousness of God from faith unto faith: as it is written, But the righteous shall live by faith.
Romans 1:17

What is meant by 'from faith to faith'?

In From Faith to Faith, Watchman Nee deals with various subjects which demonstrate the essential principle of "from faith to faith," such as:

From Faith to Faith was intended to give believers a true perspective of the gospel of Jesus Christ, as well as to provide help and encouragement for Christians to walk in the path of faith.

"God never preserves the natural, He only wants the resurrected. He never changes the natural since He is the God who 'giveth life the the dead, and calleth the things that are not, as though they were' (Romans 4:17). Calling something from nothing is the creative power of God; giving life to that which is dead is His redemptive power. Abraham believed in God as the One who creates all things from nothing and gives life to the dead. Man would like to protect his own life, but God rejects that life. He would break it. And after a man is broken by God and confesses to Him that he is absolutely helpless, that man will be raised from the dead. And such is the secret of life and power."
Watchman Nee, From Faith to Faith