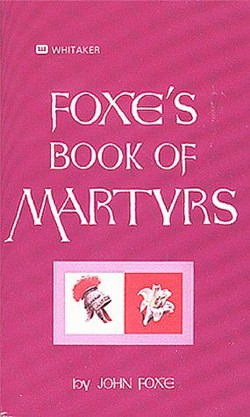 Step into history with Foxe's Book of Martyrs

They were men who triumphantly donned the armor of God: the helmet of salvation, the shield of faith, the sword of God's Word. They faced torture and death in their fight of faith, willing to stand for their beliefs and the Word of God regardless of the price. The faithfulness of such historical figures as Joh Huss, Martin Luther, William Tyndale and so many others has given us our rich Christian heritage. The courage and dedication of these men have inspired us to live for Christ today.

"Some have described John Foxe as a man of integrity and warmth who was often sought out as a spiritual counselor. His boldness in Christ gave him the courage to speak the truth before the great and the small. He won the friendship of Sir Francis Drake who read his book aloud on the western seas as he journeyed to the New World.

"In his honest and compassionate accounts of man's search for spiritual truth, and the persecution and death that accompanied that search, John Foxe etched a detailed picture of the English Reformation that would have otherwise remained unknown. But more importantly, he has left the Christian faith of all ages a legacy of inspiration and courage."
Foxe's Book of Martyrs