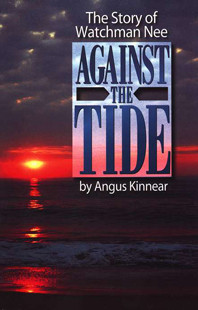 Against the Tide: The Story of Watchman Nee

From Angus Kinnear comes the engrossing and moving biography of one of China's better-known Christians, the dedicated evangelist and gifted Bible teacher, Watchman Nee. "Over the years I have been privileged to meet and converse with many who knew Nee intimately, and it is largely to these that I owe the vivd picture it has been possible to reconstruct in these pages," writes Kinnear, though he did spend weeks with Nee while still a young missionary bound for India.

Against the Tide is an honest, in-depth look at the life of Watchman Nee. Unlike most biographies, Kinnear didn't whitewash Nee's life, presenting only the saintly triumphs of his journey. The reader meets Nee the human being, with his stumbles and failures as well as the divine victories wrung out of his 'earthen vessel.' Against the Tide functions as a testimony of the power of resurrection life to move through a frail human body and ignite the world around with hunger for Jesus Christ. Would that all biographies carried such truth that all glory was truly God's!

"When the history of the Chinese church comes to be written, it will be impossible to ignore the life and work of an outstanding leader whose influence will last and whose legacy may well be a Christian fellowship which will survive the fires of persecution and the attempts being made to destroy the Christian church in China. Watchman Nee was surely another 'man of destiny' who endured to the end as seeing Him who is invisible. In twenty years of imprisonment he never betrayed his Lord. Among his converts, colleagues and followers, as in other branches of the church, there are many of like courage and faith in God who live on to continue the testimony."
Leslie T. Lyall, from the Foreword of Against the Tide