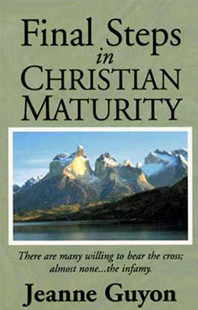 It's time to take the Final Steps in Christian Maturity!

The best way to describe this book is to say that it is Volume II of Experiencing the Depths of Jesus Christ. We had not expected to ever see a book by Jeanne Guyon that would rival this monumental Christian classic…yet that is exactly what Final Steps in Christian Maturity does!

"One of the first things a spiritual pilgrim must learn is to be quiet before God and to remain before Him—coming without any request or even any personal will in any matter. If the believer chooses to act on his own he is, of course, hindering the progress of God. He is being active strictly for his own activity's sake. (He has chosen to do something FOR God rather than BY God.) As he begins to come before the Lord, it is better for the believer to learn to die to all influences of motivation that originate in the self, which—after all—only aggrandize his self nature. If one remains before the Lord without will, he becomes like soft wax, a perfectly manageable instrument in the hands of God."
Jeanne Guyon, Final Steps in Christian Maturity

What is the story behind this truly remarkable book? The King of France ordered Jeanne Guyon to appear before Archbishop Bossuet for interrogation. This would be a fateful event for her, for the results of that interrogation would decide whether or not she would be imprisoned. Jeanne Guyon made the decision to present to Bossuet a clear statement – and defense – of her teachings. The result was a massive three-volume work entitled Justifications.

This work was later printed in French, probably appearing in only one printing. Justifications has never appeared in English, and has been virtually forgotten. Final Steps in Christian Maturity is a careful selection of some of the very best material found in that original three-volume work. Here, then, is some of the finest literature ever penned on the deeper Christian life.

*Formerly titled The Spiritual Adventure and comprised of excerpts from Justifications, a larger, three-volume work now out of print.