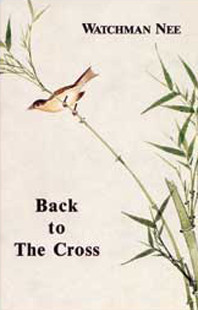 Back to the Cross

It's time to go back to the cross!

In this age, the activities of Satan are intensified. How greatly are the children of God being attacked, oppressed and especially, deceived. Now is the time for the saints to rise up and exercise the victory of the cross to resist and counterattack the Enemy. The battle is fierce and the question is, can the saints overcome without being fully armed?

"Many think that Christ crucified was the Lord's defeat, not realizing that this is where the victory was won. At the end of this age, two armies will confront each other. But the battle is won without fighting. For when Christ was crucified and raised from the dead, He had entered into death, fought with it, and conquered it. The victory was then and there secured. His victory over Satan was not accomplished without His death and resurrection. In death Christ fought with Satan – who had the power of death – and conquered him. His resurrection is the evidence of His victory."
Watchman Nee, Back to the Cross

The cross of Christ is the sole light that enlightens the current darkness. It is therefore time for the Church to go back to the cross, to the firm foundation of God. On the cross…

Back to the Cross is a compilation of various writings and addresses given by Nee to lead believers back to the life and victory in the cross. The passage of time since Nee originally delivered these teachings, however, only increases their urgency. They are as relevant today, perhaps even more so, than at the time of their first delivery.

Would that God's children might return to the cross and be true followers of Christ crucified!