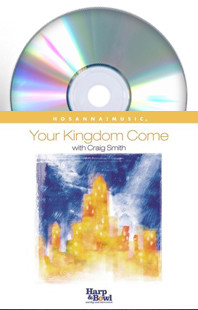 This album, featuring worship leader Craig Smith, was recorded live at the Metro Christian Fellowship in Kansas City, Kansas. The songs on Your Kingdom Come are inspired by The Lord's Prayer and the recording is a cry to the Heavenly Father in intercession and worship. Mixing original worship songs with the intercessory prayers of those gathered, this beautiful recording will take you on a journey patterned after the worship in David's Tabernacle.

Craig has written and recorded fourteen recording projects, written two books, Ancient Path and Vigil, with a recording currently in completion process and three more books in the works. Several songs from past projects charted nationally with some reaching within some landing in the top ten national Christian songs. He has been a Dove award nominee for best worship album category and once Sesac's Inspirational Songwriter of the Year.

Though for years his ministry led him to travel nationally and internationally, he has been firmly rooted and involved in his local church family in Arkansas. Craig and his wife Dianna are in their nineteenth year as pastors of the church which has been their home base for almost 30 years in Fort Smith.

Song Titles on Your Kingdom Come: