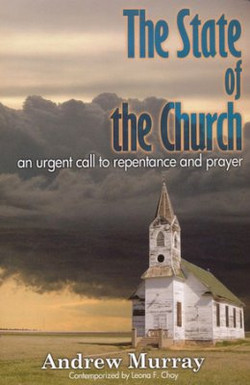 State of the Church

The State of the Church: A Prophetic Message, A Lesson in History

"A world lies dying in its need of the very message which the church of Christ alone can bring. The world in its need is still largely accessible and open for this message. The Lord Jesus Christ, having laid down His life to redeem this world, still is waiting for the message of His redeeming love to be brought to those for whom He died. Shall we not lament that His church has not the power, nor vitality, nor consecration that would make it possible for her to fulfill her blessed task?

"If the plea for more prayer for that revival which is so much needed is to be attended to by God's people, if that prayer is to be effective, the state of the church must become our priority. We must take no rest, and give God no rest through intercession, until He makes His church what it ought to be and a joy in the earth to accomplish His task."
Andrew Murray, The State of the Church

In 1911, global mission leaders met in Edinburgh, Scotland, to confront a sobering situation: two-thirds of the world was unevangelized, sending churches were declining in membership and spiritual vitality, and interest in missions was waning. How could such a weak and sickly church meet the challenge of fulfilling the Great Commission? In response to this situation, Andrew Murray wrote The State of the Church. This urgent call to repentance and prayer helped spur on one of the most fruitful missionary movements in church's history.

Is history repeating itself today? One hundred years after this book was penned, the church finds itself in a similarly weak condition. This edition of The State of the Church, contemporized by Leona Choy, speaks vividly to today's believers and their spiritual needs. As fresh today as it was a century ago, Murray's prophetic counsel is encapsulated in this challenging statement: "Christ's surrender on the cross for our salvation is the only true measure of our own surrender to Him and His service."