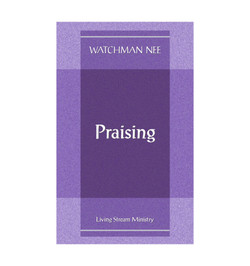 Evening and morning and at noon I will pray, and cry aloud, And He shall hear my voice.
Psalm 55:17 NKJV

Seven times a day I praise You, Because of Your righteous judgments.
Psalm 119:164 NKJV

Is Praising God the Highest Work of His Children?

There are reams of commentary on prayer and evangelism, but what about praising God? Watchman Nee makes a compelling case for the call to praise God as one of the highest calls – if not THE highest – of the born-again believer. The Book of Psalms is in fact a book of praise. Praising looks at praise as sacrifice, a means of victory, a way to build faith, basic obedience, and the gateway to understanding. There is far more to praising God than we know!

“The happiest persons are not always the ones who have the loudest praise. The loudest praise comes very often from the ones who are passing through hardships. This kind of praise is most pleasing to God and is blessed by Him. God does not want men to praise Him only when they are on the mountaintop surveying Canaan, the promised land. God desires much more to see His people writing psalms and praising Him when they ‘walk through the valley of the shadow of death’ (23:4). This is genuine praise.”
Watchman Nee, Praising