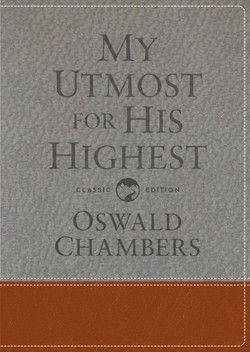 My Utmost for His Highest, Classic Gift

My Utmost for His Highest, Classic Gift edition has a whole new look!

Featuring Oswald Chambers' classic text, this is My Utmost for His Highest in an edition you'll want to share with everyone. A soft, two-toned leather-like cover encloses silver gilded pages creating a look that is neither masculine nor feminine but entirely striking. This classic-language edition of Chambers' bestselling devotional provides 366 thought-provoking, Scripture-based meditations. Let them ignite your passion for Christ each day of the year!

To sample the classic text, here is an excerpt:

Character determines how a man interprets God’s will (cf. Psalm 18:25-26). Abraham interpreted God’s command to mean that he had to kill his son, and he could only leave this tradition behind by the pain of a tremendous ordeal. God could purify his faith in no other way. If we obey what God says according to our sincere belief, God will break us from those traditions that misrepresent Him. There are many such beliefs to be got rid of, e.g., that God removes a child because the mother loves him too much — a devil’s lie! and a travesty of the true nature of God. If the devil can hinder us from taking the supreme climb and getting rid of wrong traditions about God, he will do so; but if we keep true to God, God will take us through an ordeal which will bring us out into a better knowledge of Himself.

The great point of Abraham’s faith in God was that he was prepared to do anything for God. He was there to obey God, no matter to what belief he went contrary. Abraham was not a devotee of his convictions, or he would have slain Isaac and said that the voice of the angel was the voice of the devil. That is the attitude of a fanatic. If you will remain true to God, God will lead you straight through every barrier into the inner chamber of the knowledge of Himself; but there is always this point of giving up convictions and traditional beliefs. Don’t ask God to test you. Never declare as Peter did — I will do anything, I will go to death with Thee. Abraham did not make any such declaration, he remained true to God, and God purified his faith.