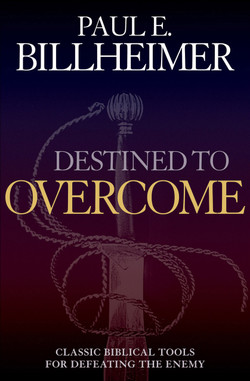 Previously titled Behold, I Give Unto You Power

Are you destined to overcome?

If Satan is actually destroyed, why is it that Satan continues to run things?
Why is it that almost everthing looks as if it is in his control?
Why is it that he seems to be the governing factor in himan life and affairs?

The answers to these questions and so much more are contained in this powerful book on overcoming evil. Never in the history of the world has it been more important for Christians to know the truth of the Word of God and the authority we possess in Jesus Christ than at this moment in time. Far too often, believers allow Satan to bluff, bluster and coerce them into submission and defeat when all the power of the resurrected, victorious Christ is available to aid them in their fight. The problem? Lack of knowledge. "My people perish for lack of knowledge" (Hos. 4:6).

"Many believers have been so tyrannized and dominated by Satan and the prevailing theology of Satan's power and invincibility that, like me, they would never dare to speak directly to him, even in the name of Jesus. For years, I couldn't imagine Satan running away. The picture that had frightened and terrified me was of Satan on the attack, 'going about like a roaring lion, seeking whom he may devour' (1 Peter 5:8). James' exhortation to resist encouraged me to face that roaring lion. When I mustered enough courage to speak directly to him in the name of Jesus, it was a great surprise to me to discover an immediate sense of deliverance, as though he had vanished, melted away."
Paul Billheimer, Destined to Overcome

In Destined to Overcome, Paul Billheimer has drawn from the Scriptures "The Technique of Spiritual Warfare" which, if put into practice by the child of God, will turn defeat into victory and tragedy into triumph. Here are classic Biblical tools for defeating the enemy!