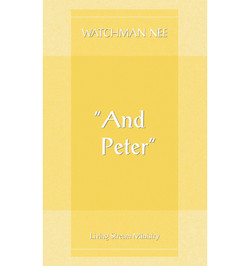 But go, tell His disciples—and Peter—that He is going before you into Galilee; there you will see Him, as He said to you.
Mark 16:7 NKJV

Why did the angel specifically mention “and Peter”?

“What kind of person was Peter? Three days before the resurrection, Peter committed a great sin, a sin that would cause the Lord not to confess him before the Father’s angels. Peter not only denied the Lord before men, he even denied the Lord before a maid who was despised by others at that time. But the Lord wanted the women to tell the disciples and Peter about His resurrection. The words ‘and Peter’ have a very deep meaning!”
Watchman Nee, And Peter

This piercing little booklet by Watchman Nee is full of hope and encouragement for the one who has failed, has fallen, has sinned, and who is ashamed and dismayed by their weakness. And Peter calls out to the believer who is separated from God by fear and pride, “Repent and return to the Lord who loves you completely!” Here is the power of the Gospel and a much needed reminder of how great a salvation and forgiveness our Father has provided us.

“You may have deeply wept, repented, and admitted that you disappointed the Lord. But do you dare say to the Lord, ‘Lord, I come to You’? Please consider this: If He was willing to go to the cross because He loved you, would He stop loving you just because you failed, fell, and backslid? Would the love He had on the cross decrease? It may be very easy for you not to love Him, draw near to Him, or return to Him; but it is impossible for Him to forget you, forsake you, or not love you. During the three days after the Lord was crucified, Peter was silent because he had fallen. But the Lord did not forget him.”
Watchman Nee, And Peter