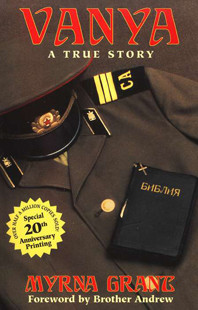 "'The Lord has told me to speak for Him wherever I am and not to be silent. This confirms what our pastors say when they preach that we must witness to God's love and not be fearful about consequences. Stefan spoke of this tonight—that we are all to preach the gospel wherever we are: in school, in our work, wherever, following the examples of the prophets and apostles.'

"Vasiliy hesitated before he spoke. At last he turned, smiling slightly to his son. He leaned toward him, and after a long embrace replied, 'So you must obey God, Vanya. So we will pray.'"
From Myrna Grant's Vanya

Out of the dark shadows of Soviet atheism rose a fearless young man whose boldness for Christ would make him a testimony to millions of believers around the world. This is the true story of Ivan (Vanya) Moiseyev, a soldier in the Soviet Red Army who was ruthlessly persecuted and incarcerated for his faith. Through two years of trial and torture, he never denied his Savior, and he never hesitated to share the Gospel with anyone who would listen.

Vanya's death was an event out of the ordinary, and it turned the attention of thousands, probably millions of people all over the world, to the Soviet Union and its religious policy. The murder of this young Baptist was not an everyday occurrence. It was a brutal act, revealing the fear and anger of a small number of men in authority.

Twenty years after his martyrdom, Vanya's powerful testimony – which included angelic visitations and a miraculous appearance of the apostle John – continues to change lives. You'll be inspired to live for Christ in your own world as never before after you experience the gripping story of a believer named Vanya.