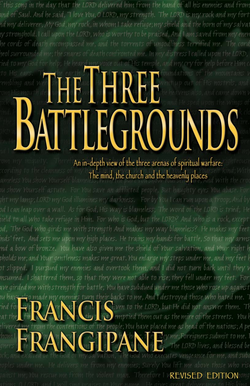 The Three Battlegrounds: An in-depth view of the three arenas of spiritual warfare—the mind, the church, and the heavenly places

Any time the Spirit of God's kingdom is truly manifested in the earth, it will ultimately confront the strongholds of hell. Indeed, wherever evil spirits have either a foothold or a stronghold, you can expect that the overcoming church will be engaged in warfare, and expect also that the gates of hell will not prevail against the church that Jesus builds.

In The Three Battlegrounds, Francis Frangipane explores the three arenas of spiritual warfare that the maturing Christian will face: the mind, the church and the heavenly places. It provides a foundation of insight, wisdom and discernment on the nature of the battle and the keys to victory. Here are some quotes from The Three Battlegrounds: