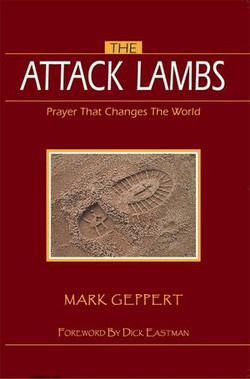 The Attack Lambs: Prayer That Changes the World!

"This idea of a lamb being aggressive seems a bit strange, I know. After all, the very image of a lamb suggests it would be the least likely candidate for the role of attacker. First of all, they are young. Then, they are small. They have no natural defense systems to speak of. They are not the brightest of critters, nor are they the fastest. All in all, they lack nearly everything necessary to take on successfully their natural enemies, the wolf or the bear. However, that is the point. Who would suspect such an unlikely animal to have the capability, let alone the desire, to go on the offensive against its enemies? Even if a lamb could somehow muster the desire, it still has no weapons with which to defend itself, let alone attack.

"Oh, but if they could, wouldn't the wolf and the bear be in for a shock. Appearing harmless, but full of power and might."
Mark Geppert, The Attack Lambs

If we are at all connected to those around us we should ask many questions:

These and many more questions are answered in the pages of this Spirit-filled book.

The Attack Lambs teaches you the bold strategies needed to combat the four forces of darkness. Everything hinges on defeating these four. It will give you the three essential disciplines so you can do effective spiritual warfare. It's easier than you think. And this book will also show you how to identify the five pressure points that can change a city or a nation. Every city has them, including yours. The Attack Lambs powerfully pictures the potential impact a gentle army of worshiping warriors can have on a lost and troubled world. You are invited to join this gentle army of loving attack lambs and help change the world!

Published in 1999, The Attack Lambs: Prayer that Changes the World is now in translation in 15 languages with 50,000 in print.