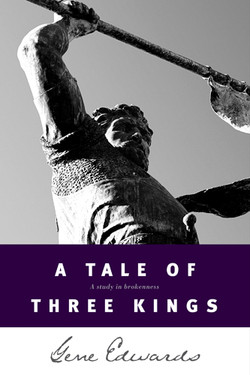 Tale of Three Kings, A

There is light, clarity, and comfort for the brokenhearted in this, A Tale of Three Kings!

"What do you do when someone throws a spear at you?"

To the many Christians who have experienced pain, loss, and heartache at the hands of other believers, this compelling tale based on the biblical figures of David, Saul, and Absalom offers comfort, healing, and hope.

"David sang to the mad king. Often. The music helped the old man a great deal, it seems. And all over the palace, when David sang, everyone stopped in the corridors, turned their ears in the direction of the king's chamber, and listened and wondered. How did such a young man come to possess such wonderful words and music?

"Everyone's favorite seemed to be the song the little lamb had taught him. They loved that song as much as did the angels.

"Nonetheless, the king was mad, and therefore he was jealous. Or was it the other way around? Either way, Saul felt threatened by David, as kings often do when there is a popular, promising young man beneath them. The king also knew, as did David, that this boy just might have his job some day.

"But would David ascend to the throne by fair means or foul? Saul did not know. This question is one of the things that drove the king mad."
Gene Edwards, excerpt from A Tale of Three Kings

Christian leaders and directors of religious movements throughout the world have recommended this simple, powerful, and beautiful story to their members and staff. You will want to join the thousands who have been profoundly touched by Gene Edward’s incomparable story. A Tale of Three Kings is a study in brokenness, and the healing that comes from God alone.