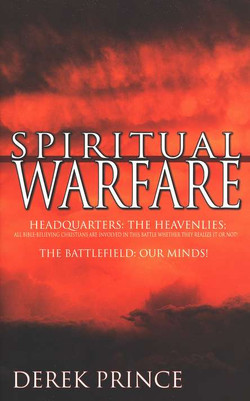 “In the legions of Rome, foot soldiers fought in close ranks. The Greek word for such a close rank was a phalanx. They were trained to fight this way and to never break rank. Every soldier knew the soldier on his right and on his left so that if he was being hard-pressed and could not protect his own back, there would be another soldier to do it for him.

“I believe the same is true with us, as Christians. We cannot go out as isolated individuals and take on the Devil. We must come under discipline, find our place in the body (which is the army of Christ), and know who stands on our right and who stands on our left. We must be able to trust our fellow soldiers. Then, when we are under pressure, we ought to know who will be there to protect our back when we cannot protect it."
Derek Prince, Spiritual Warfare

What do you know about the ongoing battle between the forces of God and the forces of evil? Derek Prince, legendary author and Bible teacher, reveals the nature of this spiritual warfare so that you can…

Your mind is a spiritual battlefield. But in Prince's clear and Scripturally based book, you can learn the enemy's strategies, stand up against his schemes, and emerge victorious!

“I have been in the ministry nearly forty years and have seen a great deal. The real tragedy of our Christian experience is that the very person who protects your back sometimes wounds you. How often we, as Christians, are wounded in the back by our fellow Christians. That is something that never ought to happen. Let us make up our minds to stand together, protect one another’s backs, and not wound one another.”
Derek Prince, Spiritual Warfare