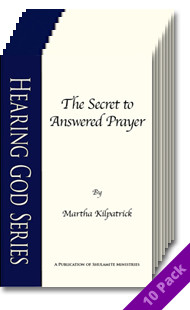 "Prayer is a joyful gaze at the Father from a state of utter, childlike need."

In the Lord's Prayer, Jesus gave no rote model for meaningless repetition. Instead He was revealing what prayer is: a wondrous adventure! Not merely asking, prayer is entirely relationship – and the key to it being answered is revealed in the Son's relationship with His Father.

In this booklet, Martha unfolds the secrets to answered prayer as revealed in the parables as well as encounters of Jesus and the disciples.

This booklet is part of the Hearing God Series.