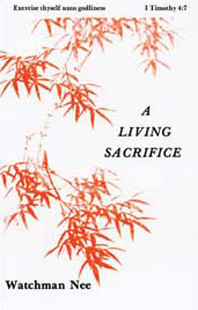 A Living Sacrifice: Volume 1 in the Basic Lesson Series

Watchman Nee understood that laying a good foundation is essential for the full growth of a Christian as well as for the building up of the body of Christ. The apostle Paul exhorted young Timothy to "have an outline of sound words which words thou hast heard of me, in faith and love which are in Christ Jesus. Keep by the Holy Spirit which dwells in us, the good deposit entrusted" (2 Tim 1:13, 14 Darby). Such a good deposit of fundamental teachings on practical Christian living forms a sure foundation on which to build.

In A Living Sacrifice, the first book in Nee's six-volume Basic Lesson Series, the spiritual issues covered are Baptism, Concluding the Past, Selling All, Consecration, Studying the Bible, Prayer, and Early Rising.

"In order to build up a new believer, the first problem to solve is thematter of consecration. But whether or not he can take in this lesson depends largely on how well he has been saved. If the gospel has not been well presented, the one who comes to the Lord Jesus may cnsider himself as doing God a great favor. For a person like him to be a Christian adds much glory to Christianity! Under such an illusion how can any one speak to him about consecration? Even a queen has to be brought to the place where she gladly lays her crown at the Lord's feet. We need to all realize that it is we who are favored by the Lord in being loved and saved. Only then can we willingly lay down everything."
Watchman Nee, A Living Sacrifice

BUY FULL SET AND SAVE 15%!
Basic Lesson Series Set - All 6 Volumes Together

OTHER BOOKS IN THE BASIC LESSON SERIES: