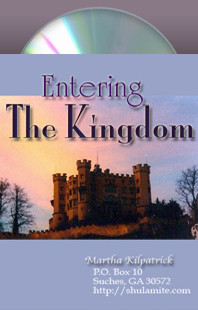 This series was recorded during a meeting with His church in Vienna, Austria.

Every provision that is met in "The Lord's Prayer" is supplied within the KINGDOM. Jesus' ministerial thrust was bringing this Kingdom to earth. The Kingdom rules over and beyond our life circumstance as well as our earthly government. As we face world crisis and turmoil, the reality of the Kingdom sets us free and puts us in a place of security.

We, as New Testament Believers, have been called to not only witness history but to take the opportunity to rule it with Jesus. In Martha Kilpatrick's Entering the Kingdom, we learn how Christ taught Kingdom living as it is to be lived today, and look back on the life of Daniel, who displayed this Kingdom reality despite what appeared to be contrary circumstantial evidence. Daniel was a captive in a heathen land, but he ruled and reigned from the counsel of the Most High God; we are called to do no less!

1) Your Kingdom Come
2) Counsels of the Most High