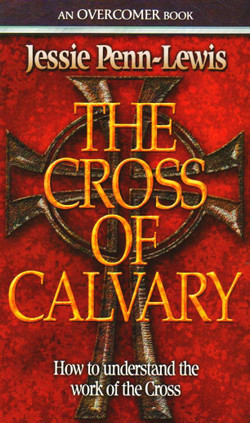 The Cross of Calvary: How to understand the work of the Cross!

"Let us go to Calvary, and in the light thrown on it by the prophecy of Isaiah, behold Him who for the joy set before Him endured the cross, despising the shame. The hour had come for which He had entered into this world. Hear the God-Man cry 'It is finished,' as He bows His head and yields up His spirit into His Father's hand! We know now that He is the Father's provided Lamb, the guilt-offering for sin—the One who with a visage more marred than any man's was wounded and bruised for our iniquities, so that by His stripes we may be healed."
Jessie Penn-Lewis, The Cross of Calvary

In a personal letter to Jessie Penn-Lewis about this book, Oswald Chambers wrote: "The break-down of natural virtues seems to be the point at which most regenerated lives are cast into despair.  Your book will help those to understand that this despair must end in death to natural goodness and self, and be raised by the power of God into inconceivably glorious power and peace and liberty of life."

The Cross of Calvary has brought real blessing to Christians all over the world. It has been described as a classic work of its kind on the Atonement.