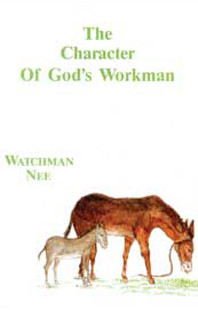 The Character of God's Workman: New Habits for the New Creation

In the work of God, the worker is more important than the work. If God cannot find the right person, He would rather delay His work. Much time and effort will He spend in the training of a workman fit for the Master's use. Basically, the training is more in the area of character than of skill. Only a new creation can serve God.

"To the one who does the work of the Lord, his personal life matters much with respect to his work. What he is in his character, habit and conduct is essential to his being used of God. This is something to which we need to pay close attention. It speaks of the formation of our nature and the cultivation of our habit. It is more than merely having an experience before God, it involves the forming of charcter. The Lord has to create a new character in us."
Watchman Nee, The Character of God's Workman

The fundamental features of the character of God's workman given by Watchman Nee are that he:

Experientially, old habits will have to be shed and new habits formed through the working of the cross is the worker's life.

The Character of God's Workman contains Nee's guidance and instruction for believers who desire to be used of God. These lessons are drawn from Nee's experience and those who served with him in years and years of ministry. Believers young and old will benefit from this practical look at the necessary character of the Lord's servants.