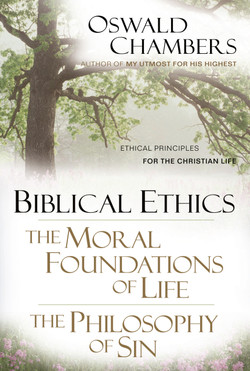 3 Volumes in 1: Biblical Ethics, The Moral Foundations of Life, and The Philosophy of Sin

Oswald Chambers was, above all else, a teacher of spiritual truths. Now, in this 3-in-1 volume, you have timeless counsel for today's Christians from the author of the classic devotional, My Utmost for His Highest.

In Biblical Ethics, you'll be reminded that the ultimate aim of Christ's atonement is that God may readjust humanity to Himself. This calls for a moral response on our part, involving thought, feeling, and will that flesh out the ethical principles of the Christian faith.

"The moral law ordained by God does not make itself weak to the weak, it does not palliate our shortcomings, it takes no account of our heredity and our infirmities; it demands that we be absolutely moral. Not to recognize this is to be less than alive."
Biblical Ethics

The Moral Foundations of Life takes you deep below the surface of everyday life where the foundations for the faith-filled life are laid. Chambers' instruction in righteousness sheds the blazing light of Scripture on the dim regions of the soul.

"In the mystical life, the majority of us are hopeless woolgatherers, we have never learned to brood on such subjects as abiding in Christ. We have to form the habit of abiding until we come into the relationship with God where we rely on Him almost unconsciously in every particular."
The Moral Foundations of Life

In The Philosophy of Sin, Chambers helps you understand what is wrong with humanity. Sin breaks hearts, spoils lives, and crushes human potential. And sin can only be put right through Christ's atonement, which makes possible human repentance and appropriation of faith.