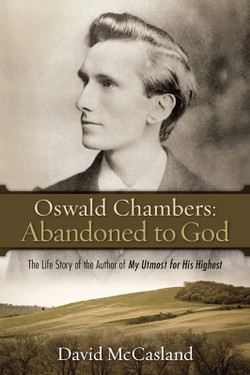 Though he was a world-famous author and missionary, little has been known about Oswald Chambers - until now! David McCasland's definitive biography of a man who considered himself completely abandoned to God reveals the fascinating stories behind the beloved author of My Utmost for His Highest. Once you see how this godly man practiced the principles he preached so eloquently, you'll be ready to give your utmost for Christ!

"Oswald, like many children reared in a Christian home, learned to pray at a young age. But because of his earnest faith in God, his prayers seemed to go beyond mere form. His brother Franklin described Oswald's prayers at the age of five as 'very original' and recalled times when the older children, along with their mother, would tiptoe up the stairs at night and sit quietly to hear him pray as he knelt by his bed.

"After setting his heart on having two guinea pigs, Oswald prayed each night for them and inspected the chicken run the next morning to see if they had arrived. He believed they would come because he had asked God. When the morning came that they were there, he never wondered if a family member had provided them. He simply thanked God."
Excerpt from Oswald Chambers: Abandoned to God